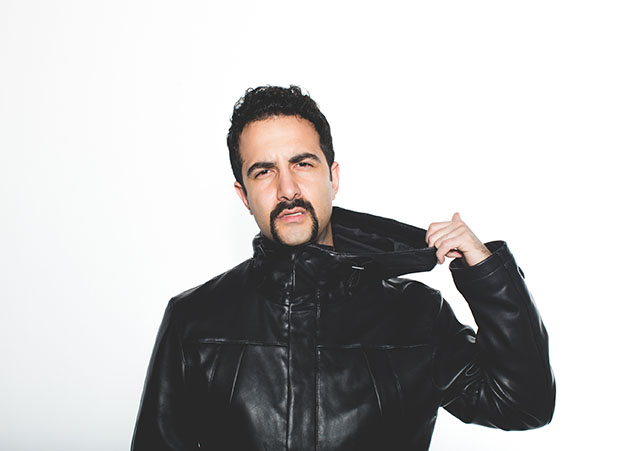 Valentino Khan really took the energy at Perry Stage for another level at Lollapalooza Brasil last Saturday (6), the dj played before Vintage Culture and he used it well his time, the crowd loved it.

Take a look at our conversation with Valentino and enjoy it:

Thank you for taking the time out of your busy schedule to give us an interview. How are you doing today? Especially right before Lollapalooza Brasil.

“I’m doing great today. Just finished packing to be on the road for the next month. Off to Lima in the morning.”

You have an extensive list co-producing hits for names such as MIA, The Bloody Beetroots, Benny Benassi, Skylar Grey, Kreayshawn, Congorock, Sean Paul, DJ Craze, T.I., B.O.B, 2 Chainz, Diplo, and Bro Safari. Some of them were awarded The Grammy. Tell me, where is the difference between the music that you make for you as Valentino Khan and for the other artists? Do you try to put a signature, some sound that reminds us that a part of you is there also?

“I’ve been very fortunate to work on some great songs with amazing people. Some peers and some legends. The music that I make for myself is very specific. When I produce for others I really can go anywhere with it. Every track is different, but I work to have a Valentino Khan sound on everything I work on. Just recently I co-produced Bubble Butt for Major Lazer and produced “Welcome To The Party,” feat Diplo, Lil Pump and French Montana.”

Playing your remix for “Recess” from Skrillex, the drums are amazing and sounds a lot for us with Brazilian/African music, do you listen this kind of music or another particular genre that is not electronic? Where does your influence come from?

“I love all kinds of music and try to incorporate a lot of influences into my style. I grew up on rap, pop and electronic music. Some of the early music I released was Moombahton, which you could say is very inspired by Brazilian / African music.”

We know you have your own drums style in your music, as we said before, specifically your kick drums as we see in “Deep Down Low”, “Pump”, “Lick It”, even in your latest singles “Feel Your Love” and “Novocaine”. What was your inspiration to create this signature?

“Growing up I had a lot of respect for what The Neptunes were doing. No matter what song they produced you always knew it was a Neptunes track. I’ve just really carried that on in my own style.”

What’s the obsession about licking all kind of stuff on the “Lick it” music video? Actually, all your music videos have this “out of box” idea, like deep down low. How is the creative process behind the scenes?

“I have been fortunate to work with great directors whose minds work in very creative ways.”

You have already released many tracks and remixes. What are your favorites? Remix and track.

“It’s hard to pick a favorite. I’m really excited about all the new music I’m about to release. My new single “Pony,” will be released in April. Then I’ll be release at least another single, then into an EP release end of May. Remixes are something I do not do often, but when I do I like to have fun with them. One of my favorites is the MIA one I did with Bro Safari.”

What piece of hardware/software do you find the most useful in your productions? What is your favorite plugin, tell us a secret or a tip about music production, we would love to know your secrets, haha.

“If I told my secrets to production it wouldn’t be a secret anymore. The most important tip is to believe in yourself! Put time and focus in to what you love and the rest will come together.”

What would you say is the most difficult part of producing music?

“Balancing my studio schedule with my touring schedule. It’s really hard because I do everything myself. Write, mix and master everything I release.”

We are really excited to your show here in Brazil, what message would you leave for your Brazilian fans?